One of the Separatists’ ideas that was so radical and caused so much trouble in England was their suspicion of things in religion that humankind had made up. They objected to the authority of the Pope, and Bishops, because no such person was included in God’s word (the Bible). They also disagreed with the feasting on Saints’ days which was observed in the Catholic and English Churches.

They did not celebrate Christmas, and in fact, it was Christmas day 1620 when the pilgrims set to work in Massachusetts. The Mayflower had found its way to Plymouth Harbour on the 16th of December. On the 25th, men were ashore, beginning to build the ‘common store’ where they could keep their goods on the land until family homes were erected.

More people arrived to join the settlement in the following years. These people did not always share the Separatists’ strong views about feasting and holidays. The ship Fortune brought another load of planters to Plymouth in autumn of 1621. Some of these new arrivals objected to working on Christmas day, and were excused by Governor William Bradford. He describes the trouble the newcomers were in when he returned to the village to find them playing games:

‘Only I shall remember one passage more, rather of mirth then of weight. On the day called Christmas day, the Governor called them out to work, (as was used,) but the most of this new-company excused themselves and said it went against their consciences to work on that day. So the Governor told them that if they made it matter of conscience, he would spare them till they were better informed.

So he led-away the rest and left them; but when they came home at noon from their work, he found them in the street at play, openly; some pitching the bar, & some at stool-ball, and such like sports. So he went to them, and took away their implements, and told them that it was against his conscience, that they should play & others work. If they made the keeping of it a matter of devotion, let them keep to their houses, but there should be no gaming or revelling in the streets.

Since which time nothing hath been attempted that way, at least openly.’
– William Bradford 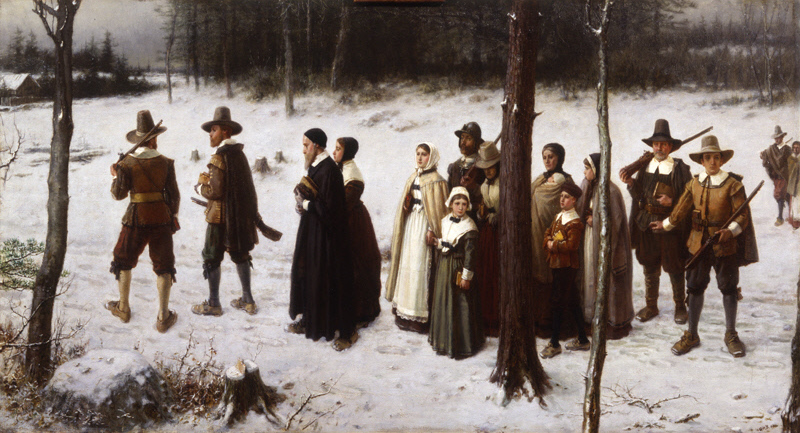 CHRISTMAS in the  English CIVIL WAR

In the 1640s and 50s, during the English Civil War, some of those whose theology roughly aligned with Separatist ideas would support the Puritan ban on Christmas. However, as in Massachusetts, those people faced resistance. In 1645, Oliver Cromwell had banned Christmas in the parts of England he controlled. John Taylor, a satirist who supported King Charles in the Civil War, would write that the:

'Harmless sports [associated with Christmas] are now extinct and put out of use… as if they had never been'
– John Taylor, The Complaint of Christmas

Christmas is a Christian festival, so why had Bradford and the Separatists, who believed in Jesus being the son of God, decided against celebrating it?

17th century Christmas celebrations were quite chaotic. The celebrations were all about ignoring ordinary rules for a day and, often, flipping the social order on its head. This might be seen as light hearted fun by many, but the Separatists were very keen on structure. They believed in predestination, which means God has already decided who will reach heaven. So, they were always looking for signs of holiness and grace in themselves and each other, and they would hate any public scandal, especially if it was associated with a religious event.

You can read more about a Puritan approach to Christmas at The Conversation; and find out about Christmas in the Civil War with History Extra.

You can discover other significant dates in the pilgrim calendar here on our website.
Thanksgiving and the National Day of Mourning